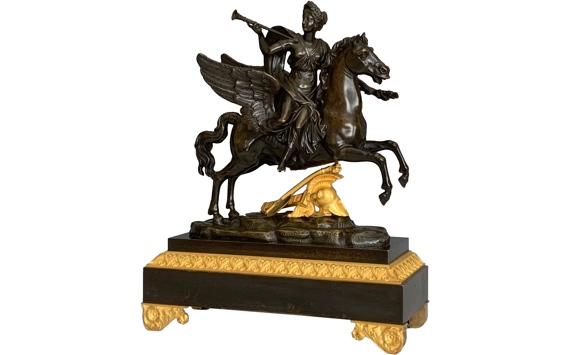 A Louis-Philippe period bronze figure of ‘Fame riding Pegasus’ after Antoine Coysevox (1640-1720). The winged Pegasus supporting Fame, a trumpet in her hand, on a naturalistic base adorned with gilded trophies of war. The stepped plinth base with acanthus scroll feet. Finely cast and chased with original mercury parcel gilding and dark patination.

Antoine Coysevox received a commission in 1698 for a group of two equestrian subjects to the glory of the king. These were made in Carrara marble in 1701-2, and placed on either side of the upper part of the horse pond, at the entrance to the park at Marly. They were moved to the west entrance of the Tuileries Gardens in 1719, where they were replaced by replicas in 1986.