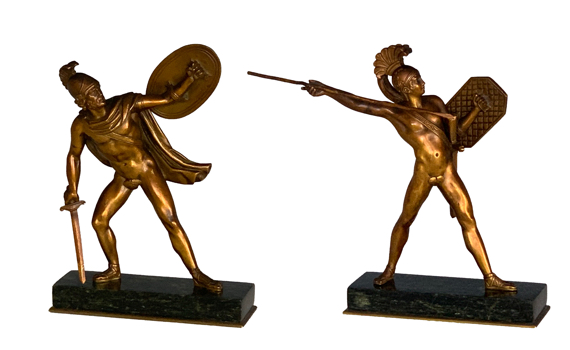 Depicting Romulus & Titus Tatius
A pair of late 19th century, Italian, gilt bronze warriors in the Grand Tour style. Each figure standing in fighting pose, a shield on one arm, bearing a sword & spear respectively in the opposite hand, standing on a rectangular verde marble plinth with gilded platform base. Finely cast with chased detail, the shield with a Medusa head. 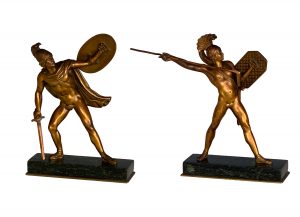 These figures are inspired from ‘The Intervention of the Sabine Women’ a 1799 painting by Jaques-Louis David, depicting a legendary episode following the abduction of the Sabine women. The painting depicts Romulus’s wife Hersilia – the daughter of Titus Tatius, leader of the Sabines – rushing between her husband and her father and placing her babies between them. Romulus prepares to strike a half-retreating Tatius with his spear, but hesitates.