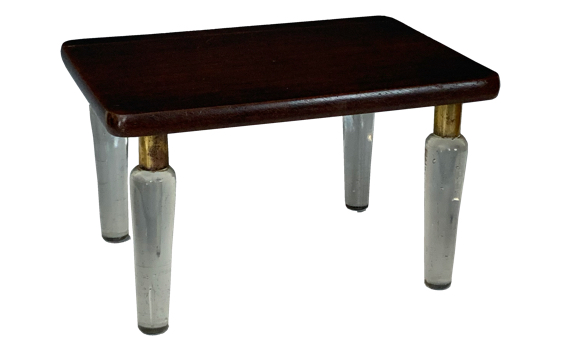 An early 19th century, George III, mahogany and glass lightning stool. The rectangular top standing on four glass legs, each with a brass collar and screw thread for easily transporting and storing. 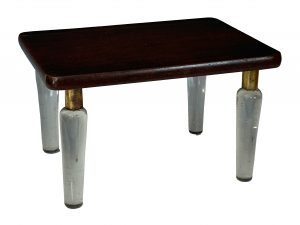 Misconceptions to the use of lightning stools include people using them to stand on during thunder storms to avoid lightning strikes, and even tests for whitchcraft. ‘Lightning’ stools were used for electrical experiments, at travelling lectures and public demonstrations, in scientists’ laboratories, or domestically as what might be termed the ‘executive toys’ of the age. A game of 1748 involved electrifying a print of the King, so that when someone tried to remove his gilt-metal crown they received a sharp blow for their treason. Another was the electric kiss, or Venus electrificata, in which a lady standing on a stool was charged up and her caress proved so painful that the gallant gentleman ‘durst not renew his kisses more than three times’. By the middle of the eighteenth century friction machines were in use for generating electric shocks to amuse spectators at public exhibitions. The charge produced creates a momentary current whose electrical energy stimulates the nerves and causes an involuntary contraction of the muscles. Perhaps the largest recorded demonstration was one organized by the ‘Abbe’ Jean Antoine Nollet (1700—70), who described himself as ‘official’ electrician to Louis XV. He assembled no fewer than seven hundred monks at the Convent de Paris, each joined to his neighbour by means of a length of iron wire clasped in each hand, and completed a circuit a mile long with a conductor and condenser. At the moment of discharge it is recorded that, to the great joy and amusement of the King and his retinue, but to the discomfort of the monks, all seven hundred ‘leaped into the air with a simultaneity of precision outrivalling the timing of the most perfect corps de ballet’.