A large pair of late 19th century figures of ‘Hippomène ‘ & ‘Atalante’ after Guillaume Coustou & Lepautre, probably cast by Barbedienne, with ‘Reduction Mechanique A Collas’ seals to bases. The figures in expressive running pose, standing beside tree stumps, on circular bases. Hippomenes carries one of the golden apples in his hand, ready to throw to distract Atalante. Original dark brown patination.

Cast after the marbles situated in the ‘Jardin des Tuileries’, and shown in the Bardedienne catalogue of 1886. The size of each is ‘La reduction aux 2 cinquièmes’. 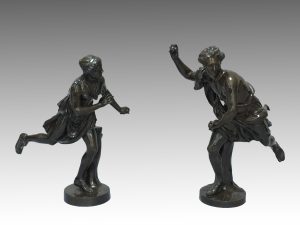 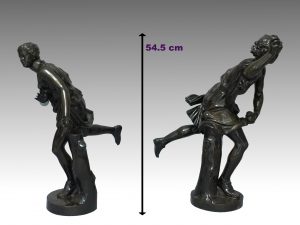 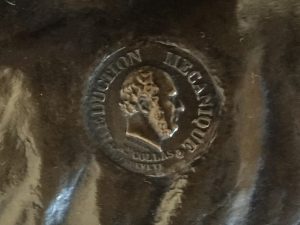 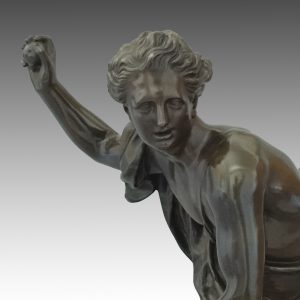 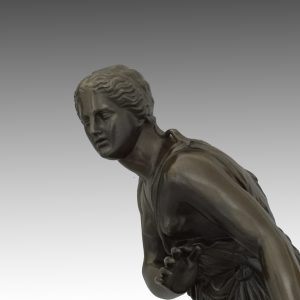 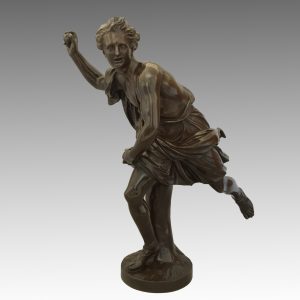 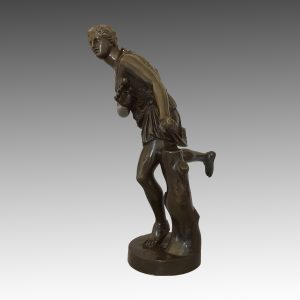 Hippomenes fell in love with Atalanta, the virgin huntress who strongly disliked the idea of getting married. After a warning from an oracle about getting married, she declared that whoever wanted to marry her had to beat her in a footrace (herself being a notoriously swift runner), and that those who should try, and lose, would be punished by instant death. Another version (followed by Hyginus) was that her father wanted her to be married, but she did not. She agreed to running races against her suitors because she thought she would never lose.

Atalanta raced all her suitors and outran all but Hippomenes, who defeated her by cunning, not speed. Hippomenes knew that he could not win a fair race with Atalanta, so he prayed to Aphrodite for help (the goddess, in the meantime, disliked Atalanta’s neglect of love).

Aphrodite gave him three golden apples – which came from her sacred apple-tree, and told him to drop them one at a time to distract Atalanta. After each of the first two apples, Atalanta was able to recover the lead, but when she stopped for the third, Hippomenes won the race. It took all three apples and all of his speed, but Hippomenes was finally successful, winning the race and Atalanta’s hand.