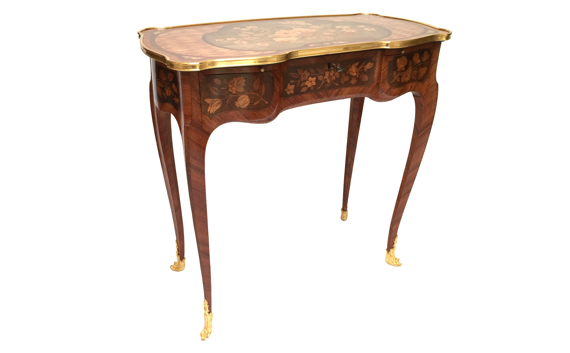 A late 19th century, French, kingwood and marquetry table de toilette after the model by Jean-François Oeben held in the V&A collection. The shaped top with central  floral marquetry panel with parquetry border sliding back above a frieze drawer fitted with easel mirror and side compartments lined with silk, supported by four slender cabriole legs ending in gilt bronze sabots.

Exhibiting at the International Exhibitions in Paris in 1849, 1855, 1867, 1878 and 1900, also in London in 1862, winning numerous medals. His work was described in the 1867 Exposition Universelle as: ‘toute sa production révèle une qualité d’exécution de tout premier ordre’ (all its production reveals a quality of execution’).

After his death in 1877 his wife & son, Paul-Charles, took over the business moving to 134 Boulevard Haussmann. Pieces from this period are usually signed ‘Veuve Sormani & Fils’.