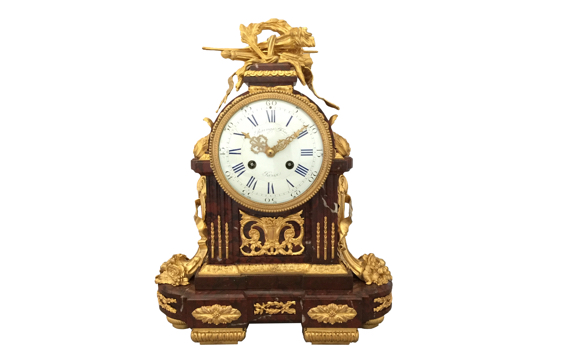 A Napoleon III, French, gilt bronze & rouge marble mantel clock in the Louis XVI style. The white enamel dial with Roman numerals and a 14 day movement with Brocot suspension striking the hour & half hour on a bell. The griotte marble case surmounted by a flaming torch & quiver of arrows, above cornucopia to the sides with plinth base. Movement and case numbered 1299. 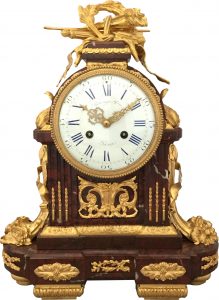 Zacharie Joseph Raingo and his four sons, Adolphe, Charles, Denis and Dorsant, together formed Raingo Frères in 1823. The firm specialised in producing Empire and Restauration style clocks at first, then mantle, wall and table clocks in the Louis XV & XVI style followed.

Raingo Frères had expanded the range of their output into other bronzes and furnishings by the mid 19th century. In the 1860s, the Raingo Frères supplied clocks and bronzes to The Emperor Napoleon III and his wife Empress Eugenie, these now form part of the collection at the Musée du Louvre.