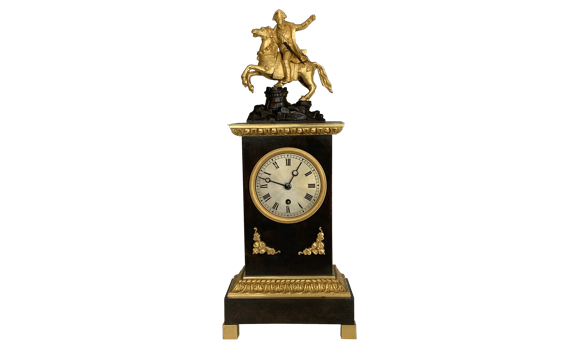 A patinated bronze and ormolu mounted timepiece from the first half of the 19th century. The figure of Napoleon astride his favoured mount Marengo, above castle remains and rocky base, the silvered dial with Roman numerals inset a patinated case with ormolu decoration. The eight day movement with silk suspension by Thomas Cox Savory ‘A Paris’ No 10524. Mounts regilded.

Primarily a retailer and silversmith, Thomas Cox Savory is recorded at 47 Cornhill, London in 1838 when he exhibited in his front window a mystery clock by Robert-Houdin. Loomes records him there 1851-1857 and also as having premises in Paris from the mid to late 19th Century.

All our clocks are sold with a years guarantee having been professionally serviced & overhauled by a registered FBHI.