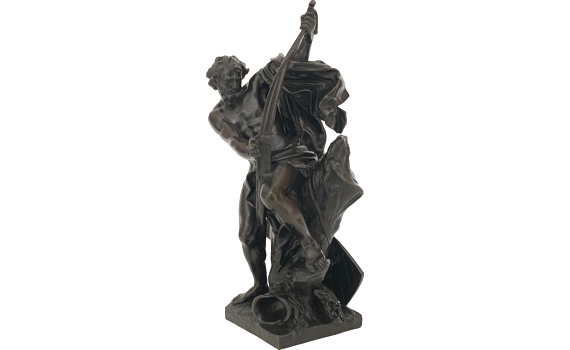 Jacques Bousseau, 1681-1740, was a French sculptor. He was a pupil of the celebrated Nicolas Coustou, and was approved at the French Royal Academy of Painting and Sculpture, in 1715. In France and Spain he bore the title of King of Sculptor and was well known and respected during his lifetime. Various examples of his sculptures, as with other of his contemporaries, were copied by sculptors in the late 19th Century, to satisfy demand for classical pieces such as this.
The Argument
Penelope, to put an end to the solicitations of the suitors, proposes to marry the person who shall first bend the bow of Ulysses, and shoot through the ringlets. After their attempts have proved ineffectual, Ulysses, taking Eumæus and Philætius apart, discovers himself to them; then returning, desires leave to try his strength at the bow, which, though refused with indignation by the suitors, Penelope and Telemachus cause to be delivered to his hands. He bends it immediately, and shoots through all the rings. Jupiter at the same instant thunders from heaven; Ulysses accepts the omen, and gives a sign to Telemachus, who stands ready armed at his side.