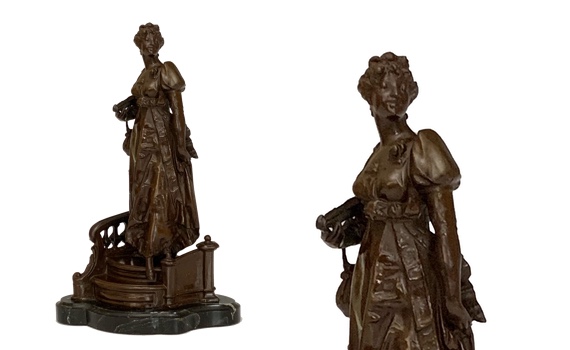 Georges Van Der Straeten (1856-1941)
A charming small bronze of a Belle Epoque lady descending a staircase. Elegantly dressed & looking up to her left, she holds a fan in her right hand, a small bag hangs from her arm as she holds her skirt in her left hand and steps down the staircase with balustrade. Standing on a shaped noir marble plinth. Dark brown patination. 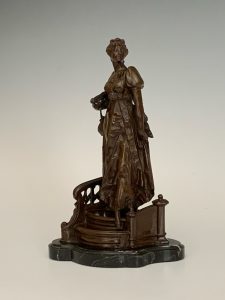 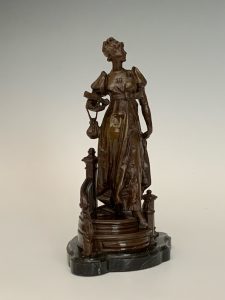 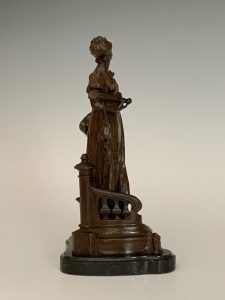 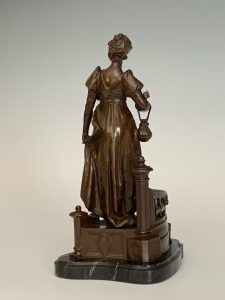 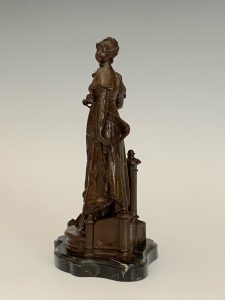 Georges Van der Straeten (1856-1941) was a celebrated Belgian sculptor, who was famous for producing delicate busts and figures in plaster and bronze. Van der Straeten worked mainly in the Belle Époque style, focusing on finding novel and beautiful ways to express the human form. Originally from Ghent, Van der Straeten initially worked as a lawyer until 1882, after which he took up sculpting. In 1883 he moved to Paris, where he exhibited at the Louvre’s Salon exhibition from 1885 until 1912. At the Exposition Universelle in Paris in 1900, Van der Straeten received a silver medal award for his high quality finishes and his technical expertise. In 1903 he became a Knight of the Legion d’Honneur. Later in his life Van der Straeten returned to his home town of Ghent in Belgium, where he died in 1941.