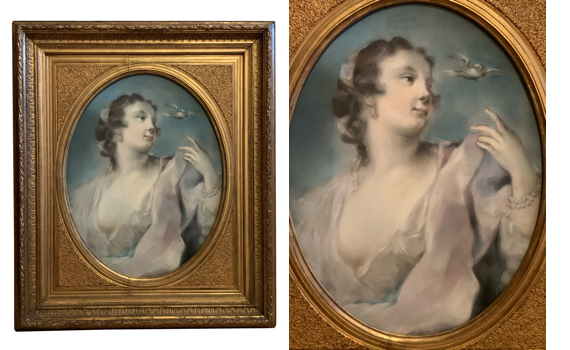 Depicting ‘Air’ from the series of the four elements painted by Rosalba Carriera in 1746. An allegory of Air, her frothy white gown billowing in the wind, her gaze lifted up and away at a little white bird flying over her shoulder, inset oval slip and moulded rectangular gilt frame.

In 1746, Rosalba Carriera (1673-1757), the most popular and sought-after pastel painter of Europe in the 18th century, painted four “fancy piece” pastels of the same dimensions (56 x 46 cm), each representing one of the four elements.

To copy the painting N0. 50 from Carriera, allegorical figure the air

in accordance with the Kopir regulations of 1897