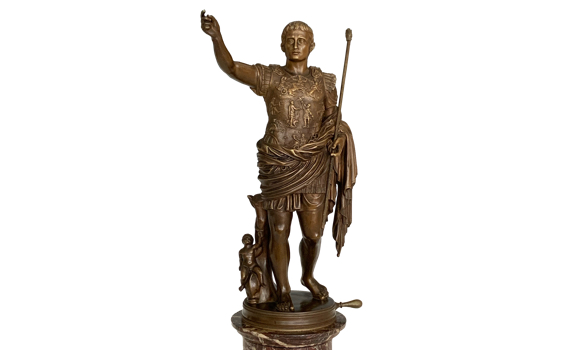 A late 19th century Italian bronze figure of Augustus Caesar, standing and rotating on a turned marble socle base. The figure is modelled after the Antique discovered in 1863 in Prima Porta, Rome.

Augustus was the adopted son of Julius Caesar. He became emperor in 27 BC. This statue represents the Emperor in armour, with a cupid on his right side sitting on a dolphin. On his breastplate is represented the historical scene of the restitution of an emblem lost by Crassus in 54 BC, at the Battle of Carrhae. This emblem was subsequently placed in the temple of Mars the Avenger in the Forum of Augustus.