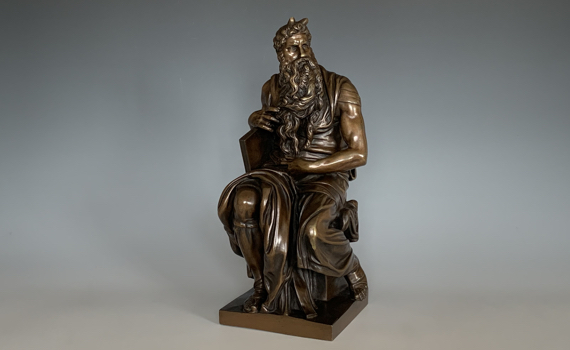 A late 19th century German bronze figure after Michelangelo of Moses. Depicted seated with tablets under his right arm, the finely cast and chased bronze with brown patination and circular seal to the reverse.
The Moses (c. 1513–1515) is a sculpture by the Italian High Renaissance artist Michelangelo Buonarroti, housed in the church of San Pietro in Vincoli, Rome. Commissioned in 1505 by Pope Julius II for his tomb, it depicts the Biblical figure Moses with horns on his head, based on a description in the Vulgate, the Latin translation of the Bible used at that time. Michelangelo’s Moses was unequalled by any modern or ancient work. Seated in a serious attitude, he rests with one arm on the tablets, and with the other he holds his long beard, the hairs, so difficult to render in sculpture.